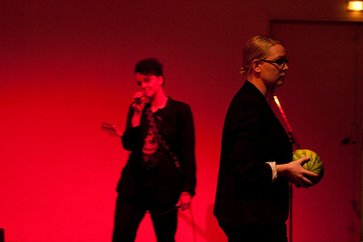 Between 2009 and 2011, I created performance art concerts and soundscapes together with Berlin-based artist Janine Eisenächer as Harder/Eisenächer CLAIMS (www.eatwork.de). Since 2006, our duo Eisenaecher/Harder CLAIMS worked with performance objects, text material, artistic actions and songs in a series of duo performances. In 2009, we began to focus more strongly on the sound within our work, particularly investigating the format of the performance-hearplay and the relation between body-generated sounds and sound-generated bodies. Some beautiful works and few sound recordings were created until the collaboration ended in 2011.