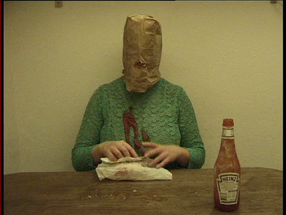 This video performance was created with Janine Eisenächer as a contribution to the  (e)at_work website-project Employee Of The Month which dealt with the relation between work and identity, and in the context of Eisenächer/Harder CLAIMS' performance research Waiting For Cargo. The re-enactment, or variation, of Andy Warhol's "Andy Warhol Eating A Hamburger" (1981) later became the starting point for a durational piece titled Der Letzte Exorzismus.